Christmas Around The World - UK - The British Hamper Company

Christmas Around The World - UK

Whilst we are located in the UK, a lot of our blog visitors aren't, so we wanted to make sure that we didn't forget to include the customs of our very own country. So we say farewell to the Christmas celebrations in Sweden and head across the North Sea for 1,404km to the UK.

The United Kingdom, located in northwest Europe, covers an area of 242,495 square km and has a population of more than 66 million people.

The UK is a small nation - you're never more than 70 miles from the coast.

Most visitors to London will recognise the sight of Big Ben - but did you know that it's not the clock tower, it's actually the 13-tonne bell inside the tower.

Us Brits are a nation of tea drinkers - around 60 billion cups per year! We're not limited to just tea though - we love coffee too!

So, how do they celebrate Christmas in the UK?

In the UK, they celebrate Christmas on 25th December.

The official religion in the UK is Christianity with Queen Elizabeth II being the head of the church of England.

Most people will have a Christmas Tree (perhaps more than one), both real and fake trees are popular, and the decorating of the tree tends to be a family thing where everyone adds something to it. The most typical Christmas Tree decorations are; baubles, fairy lights, glass ornaments, and a star/angel to go on top. Holly, ivy and mistletoe are sometimes used to decorate some buildings/rooms. Christmas lights are very popular and decorate homes, shops and streets in the form of string-lights and shaped-lights (stars, Santas, etc.). Candles are also popular decoration especially in churches, and so are nativity scenes. 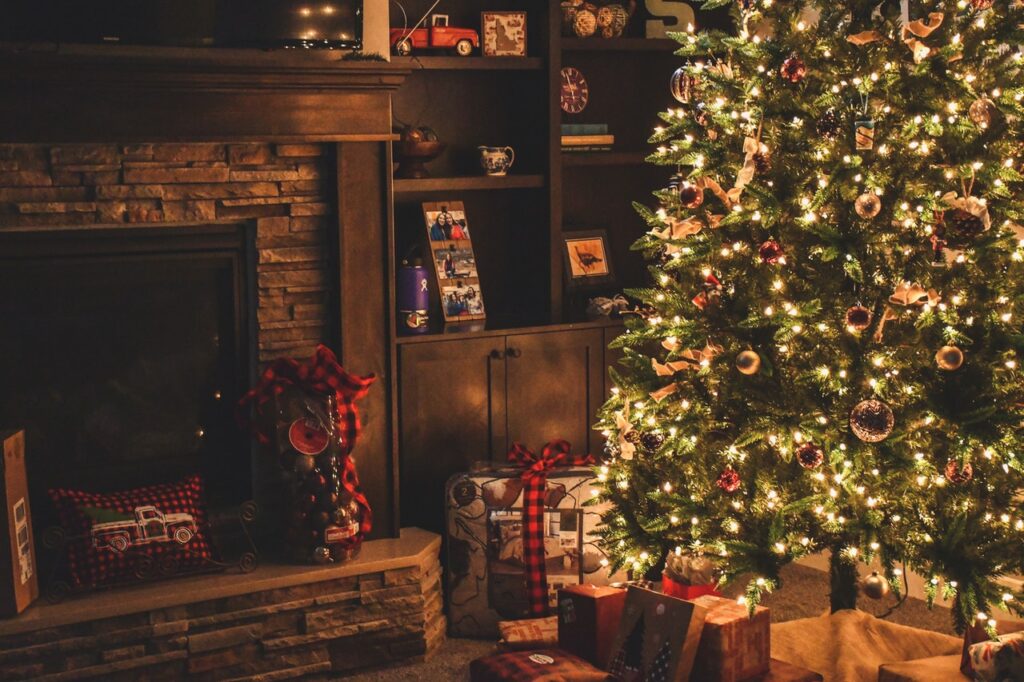 Christmas is a family event in the UK so family and friends will get together throughout the Christmas period to celebrate. Christmas light ‘switch-ons’ happen in many towns whether organised by a city council, or just organised by locals, the most famous switch-on is in Oxford Street in London.

Nativity plays and carol services are popular, commonly performed by children in schools, choir groups at markets, and church groups in church services. Many churches will have a ‘carols by Candlelight’ service which is a carol service in which the church is purely lit by candles. Christingle services are also popular in most churches.

The lead up to Christmas is advent which can be counted down using advent wreaths or, more commonly, advent calendars with a chocolate or small gift behind each door for every day of advent.

Children believe that Santa Claus/Father Christmas will leave presents in their stockings (sock-shaped sacks) hung by the fireplace or at the ends of beds and under their Christmas Tree ready for them to open on Christmas morning. In early December, children usually write letters to Santa which are either ‘posted to the north pole’ by their parents or thrown into the fireplace so Santa can read the smoke. Children may also leave out mince pies and brandy/whisky for Santa to have on his travels, although many people may now leave out a non-alcoholic drink like milk. Carrots or oats can be left out for Santa’s reindeer.

During most Christmas celebrations when a meal is involved, people will have Christmas crackers which are cardboard packages that can be pulled from either end to make a popping noise and reveal a paper crown, a joke, and a small gift. In the north of England, ‘the Sheffield carols’ are sang in local pubs by the pub-goers throughout the Christmas period. Christmas songs are played in shops and on radios during the build up to Christmas, a few of them are religion-based but most are more upbeat pop songs about various Christmas things (Santa, snow, etc.).

Christmas markets are popular in most towns and cities where people buy and sell handmade decorations, food, and gifts, and there are sometimes simple fairground rides/games. Shops, theme parks, and other public attractions may have a ‘Santa's grotto’ where children can go and tell ‘Santa’ what they want for Christmas, perhaps getting a small gift from him.

Pantomimes are very popular, especially among families with young children, and they usually tell a comedic version of a classic fairy tale (e.g. Jack and the Beanstalk, Cinderella). On Boxing Day, there are massive sales so many people will wake up early in order to go shopping, some families may also exchange smaller gifts on boxing day. There’s a tradition that originated in the UK that, if two people stand under the same piece of mistletoe at the same time, then they have to kiss.

Here are some origins of our UK Christmas traditions:

Our next Christmas destination looks at the Christmas celebrations in the USA.