Christmas Around The World - USA - The British Hamper Company

Christmas Around The World - USA

We head away from Christmas in the UK now and take our final journey across the Atlantic Ocean, travelling southwest for 6,830km to the United States of America.

Covering a massive area of 9.834 million  square km and with a population of 328.2 million people, the USA is certainly a nation that everyone hears a lot about - it's a big nation with big personalities! They put the first man on the moon, have a hugely successful movie industry in Hollywood, many famous landmarks - Grand Canyon, Mount Rushmore, Yellowstone Park, pretty much all of New York, the Golden Gate Bridge to name just a few.

As we're taking about Christmas in this blog, did you know that there are 182 US places that contain Christmas in their names? Maybe you've been to Christmas Lake in Washington or Christmas Island in Florida?

As you already read above, the USA has a large population. What you might not know though is that the population in most states are quite spread out. In fact, only 10 states have more people living in them than New York City!

So, how do they celebrate Christmas in the USA?

In the USA, they celebrate Christmas on 25th December.

Just over half of the USA population identify as Christian. The largest Christian group is Protestant.

Christmas trees are very popular in most homes and stores. Along with the more traditional decorations of baubles, glass ornaments, and fairy lights, there’s also popcorn threaded onto a string which is used to decorate the tree. There’s also a ‘Christmas pickle’ ornament (see below for associated tradition). Many people go all-out decorating the exterior of their home with lights, statues (usually of Santa, reindeer, snowmen, etc.), moving figures, projections and fake snow. Towns and cities are also often decorated with lights. In the southwest of the USA there are ‘luminarias’ which are paper sacks, partially filled with sand, with a candle inside. These are used to line the paths on Christmas Eve which are supposed to represent the idea of lighting the way for Mary and Joseph. Some churches and homes will have nativity scenes. 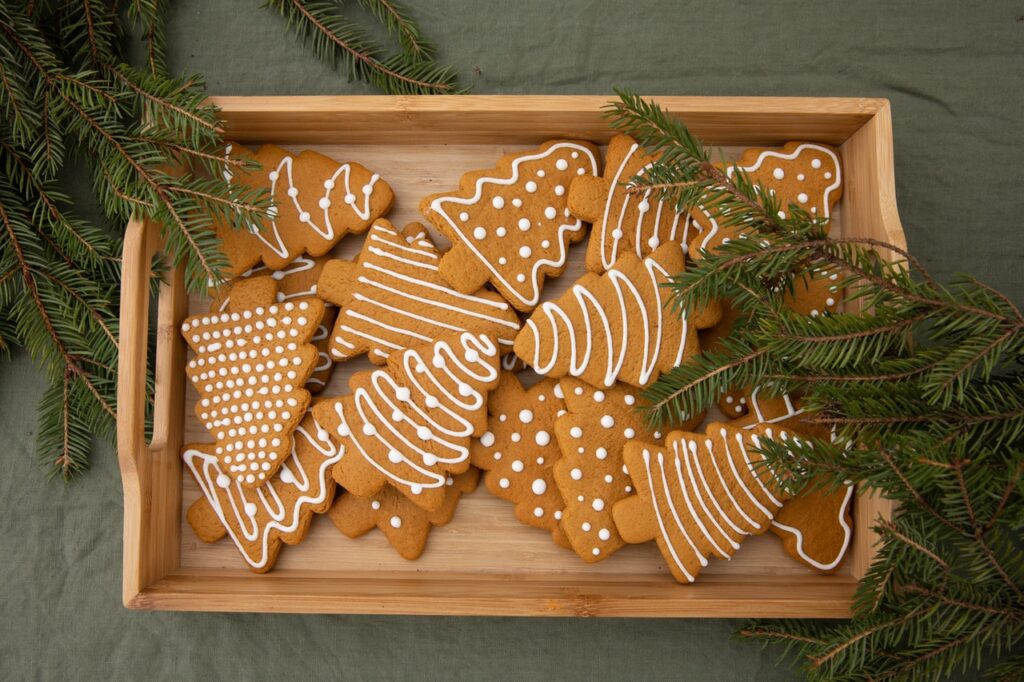 Photo by Ekaterina Bolovtsova from Pexels

America is pretty multi-cultural so there are many different Christmas traditions depending on the culture of the family. Many Christian Americans will go to Church at Christmas time to celebrate the birth of Jesus, there are also carols services held by many churches. There are services by candlelight on Christmas Eve and some churches will have a mass of the nativity during which a nativity play is performed.

In some states (e.g. Massachusetts, Connecticut, etc.) there are ‘Christmas shops’ which sell decorations and Christmas-related gifts all year round. Exchanging gifts and Christmas cards is common practice as is getting together with the whole family. People sometimes like to go door-to-door carol singing usually in exchange for money for charity.

There’s a unique American tradition of the ‘Christmas pickle’ which is when some families will hang an ornament of a pickle on their Christmas tree and the first person (usually a child of the household) to find it gets a present (this supposedly originated in Germany but that has since been proven false – as very few Germans have even heard of the concept - and is now just thought to have been a tradition invented by a random salesman who needed to sell some leftover pickle ornaments).

Many children believe Santa Claus will leave them presents under the Christmas Tree ready for them to open on Christmas morning. Milk and cookies are often left out for Santa by the children. Ice skating is a popular activity, with public ice rinks being set up in many cities over the Christmas period. The South West of the USA shares quite a few customs with Mexico. In the south of Louisiana, small communities of families light bonfires along the high river banks of the Mississippi river to help light the way for Santa Claus (often called Papa Noel in Louisiana due to their strong links with France). Christmas in America is a period of general goodwill and charitable work. The Nutcracker ballet and other Christmas themed performances are popular and schools host holiday pageants.

Whilst Thanksgiving is the big turkey celebration in the USA, they do tend to push the boat out at Christmas too. Due to the multitude of cultural influences of the country, food traditions vary from state to state but they generally resemble a roast dinner similar to their Thanksgiving dinners. Some states (Alabama for example) love a good Prime rib at Christmas, whilst Louisiana sticks to their Creole roots and cooks up a gumbo. Connecticut still love a bit of turkey, whilst others prefer to save that just for Thanksgiving.

Gingerbread is popular at Christmas in the USA so features quite heavily in their desserts. Pies and cookies are also popular.

Eggnog is traditionally drunk at Christmas although its origin seem to stem back to England in the 1600s. You can read more about early Christmas traditions in the UK.