Christmas Around The World - Lithuania - The British Hamper Company

Christmas Around The World - Lithuania

Our journey around the world to learn about Christmas traditions sees us leave Christmas in Lebanon behind and travel Northwest for 2,544km to Lithuania.

Located in eastern Europe on the eastern shores of the Baltic Sea, Lithuania became independent from the Russian Empire after the Russian Revolution in 1917. It is one of the 3 Baltic states - the others being Estonia and Latvia. Lithuania has an area of 65,200 square km and a small population of just under 3 million.

The most popular sport in Lithuania is basketball and the country has seen several great NBA names including Arvydas Sabonis.

An oak tree located in the village of Stelmužė - named Stelmužė Oak - is one of the oldest tree in Europe and is rumoured to have survived the Crusades. It is estimated to be between 1500 and 2000 years old. It was declared as a national monument in 1960.

So, how do they celebrate Christmas in Lithuania?

Christmas is celebrated on 25th December in Lithuania. Their Christmas season lasts until Epiphany on 6th January.

Lithuania has a large Christian following - around 93% of the population. The largest denomination is Catholic (around three quarters of the people).

A traditional decoration is straw which is laid over a table and then covered with a clean, white table cloth. Tables are also decorated with candles and small branches from a fir tree. Christmas trees are pretty popular and are often decorated with white paper straws crafted into stars, snowflakes and other geometric shapes. Nativity cribs are also very popular and churches often have large scenes outside. 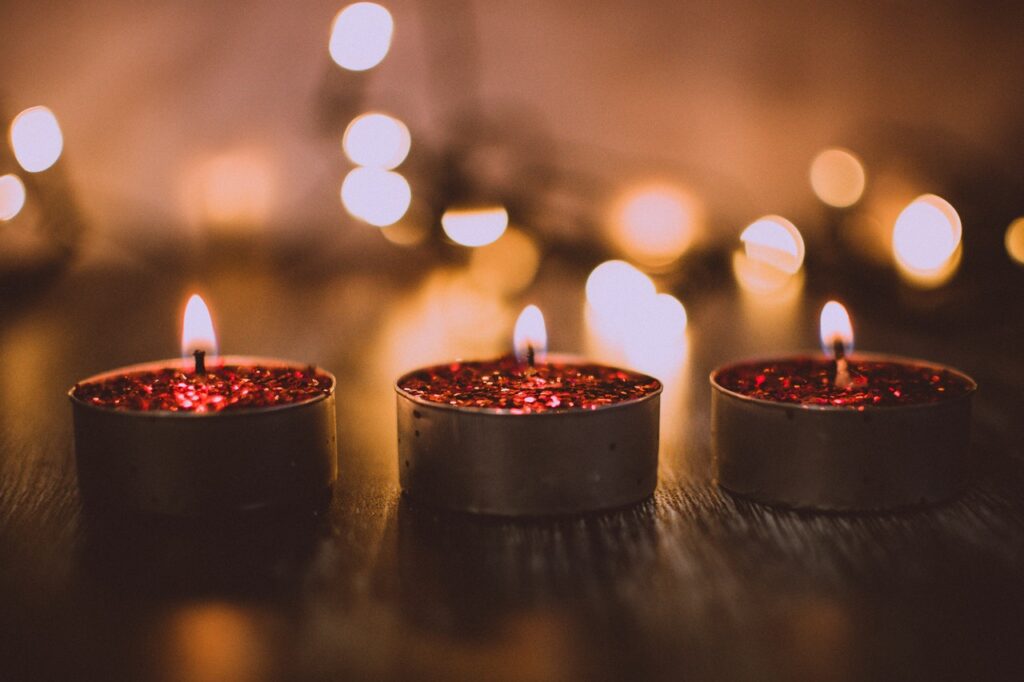 Photo by Lisa Fotios from Pexels

There’s a superstition about pulling straw from underneath the tablecloth – it’s said that the length of the straw reflects the length of your life and if the straw is thick then it’s a sign of a rich and happy life. An extra place is set at the table for the main meal if a family member couldn’t make it or if a family member died within the previous year. Many people will also invite anyone they know who would otherwise be alone for Christmas Eve.

The Old Man of Christmas (Santa) may visit after the meal and give people presents, while gifts are exchanged between everyone. The adults may then go to midnight mass while the children usually go to bed.

The main Christmas meal is eaten on Christmas Eve and also called Kūčios. Many people fast during the day and so the meal is eaten in the evening/night once the first star can be seen and the meal shouldn’t contain any meat. A plate of Christmas wafers is usually in the centre of the table with a wafer for every person at the table. The wafers are given out as starters with Christmas greetings, and an apple may also be cut and shared between everyone.

The rest of the meal then usually consists of 12 different dishes, including; fish, kūčiukai (small sweet pastries) soaked in poppy milk, kisielius (drink made form cranberries), beet soup, dried fruit soup, vegetable salad, potatoes, mushrooms, sauerkraut, and a wheat porridge with honey and bread. Typically either water or homemade cider is drank with the meal.

The dessert is often kissel which is a fruit soup/jelly thickened with potato flour, or stewed fruit compote.