Christmas Around The World - Hong Kong - The British Hamper Company

Christmas Around The World - Hong Kong

We leave the Christmas celebrations in Haiti behind us and travel 15362 km West across the Pacific Ocean to Hong Kong!

Hong Kong is home to the world's largest covered escalator! The Central Mid-Levels escalator and walkway system provides a connection between the Central and Mid-Levels districts on Hong Kong Island and is more than 800m long in total!

The number 4 is unlucky in Hong Kong as it sounds like the word for death in Chinese. It's therefore quite common for apartment blocks to have no 4th floor.

What do Christmas celebrations look like in Hong Kong?

In Hong Kong, Christmas is celebrated on 25th and 26th December.

Around 20% of the Hong Kong population follow the traditional three teachings of China. Christians make up around 12% of the people and around 4% who follow Islam.

Hong Kong Christians celebrate big at Christmas. Tinsel, Christmas lights, poinsettias flowers and Nativity scenes are all popular decorations in homes, churches and most public places. Christmas Trees are also very popular, especially with Christians. During ‘Winterfest’ there are massive lightshows that decorate the cityscape, like the Pulse 3D Light Show, which happens around the plaza of the clock tower and uses 3D projection mapping to create a breath-taking display. There’s also a Symphony of Lights every night of the year (weather permitting) at 8 pm which is another light show in Victoria Harbour and along the Avenue of Stars with loud music and narrative. 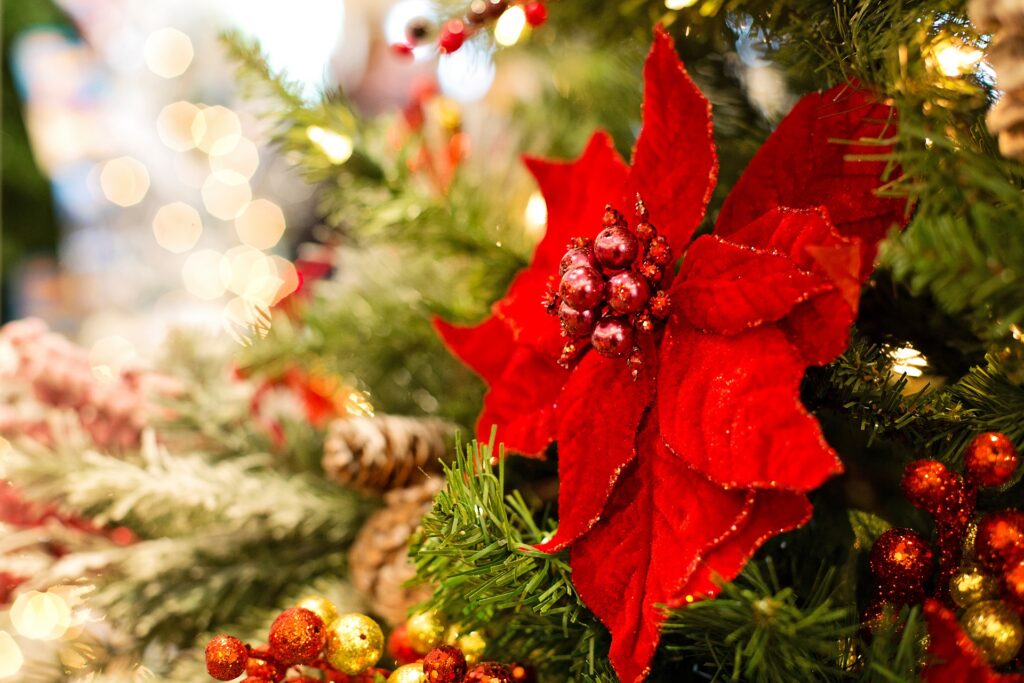 Photo by Jill Wellington from Pixabay

There are usually two different services at different times on Christmas day, one in English and one in Chinese, so that both Europeans and the Chinese living there can attend a service that they’ll understand.

Christmas cards are popular which most people buy, although some people will make their own using traditional Chinese craft techniques.

During the Christmas period, there’s a whole street in Hong Kong that will only sell Christmas trees and other plants.

‘Winterfest’ is essentially a huge winter party that involves shops, theme parks and other attractions in Hong Kong. The celebration is famous for its incredible light and fireworks displays that happen all over the city (there’s also a big New Year’s countdown). There’s a two-day public holiday for Christmas. Ballets, like the Nutcracker, and musical events are also popular things that many people will attend.

Many of the top restaurants and hotels in Hong Kong will serve special Christmas meals. Most ‘Christmas dishes’ in Hong Kong are foods associated with the Chinese New Year like roast barbequed pork, chicken, dumplings, and soup. Apples wrapped in coloured paper are exchanged and eaten on Christmas Eve.

Our next Christmas celebration destination is Hungary.